I am always behind the times when it comes to the almost weekly regular blog carnivals and missed the 58th edition called "Fact or Fiction". But when I came across this e-mail from a friend yesterday I figured some of you readers will get a kick out of it. It reads:

Comment: If you were around in 1919 (just before prohibition started) and came upon the following poster ...

Would you quit drinking? 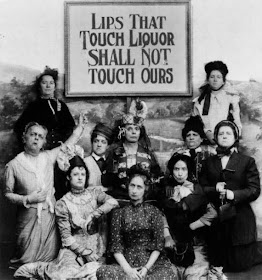 So I wanted to find out if it was a spoof or a real poster (which I didn't believe it was). I typed in 'prohibition poster' in Google and the first hit was a Snopes.com forum page discussing this poster. You can follow the discussion (and some of the snide remarks) here.

I followed some of the links and found out this photo was listed by the National Park Service archives as "Caption: Movie Still, "Lips That Touch Liquor Shall Not Touch Ours." in the Black Maria; Unknown Date; {23.430/25} (jpg)." That looked interesting. So I tried to find out what the movie Black Maria was about and at first tried to search IMDB but came up with 3 foreign films that obviously didn't match. Then I found the entry to Thomas Edison's Black Maria studio on Wikipedia.

So this dates the picture back to 1893-1901 when the studio was in operation. But the 18th amendment was passed in 1919. So that didn't make sense to me until I read a little more about the prohibition movement and found out it started in the mid 1800's. Now it all makes sense.

Still, this is a very progressive, satirical way to fight prohibition almost a century ago. When I scan through century-old census enumerations and see mostly farmers and day laborers I tend to forget that other parts of the US were thriving with cultural and "modern" occupations. A movie studio making a spoof on prohibition never really crossed my mind!

One last tidbit about the poster. The words on the poster are from the name of a song that was received at the Library of Congress on May 11, 1900, but was created in 1874 and published in San Francisco: 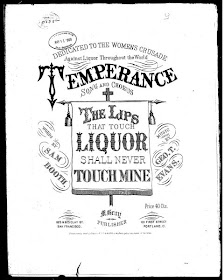 LOC has 34 entries under 'temperance' for these kinds of songs. So it was a legitimate phrase from the temperance movement. The LOC listing comes complete with sheet music too. So all you musicians out there can download and play it.

Even a funny e-mail spoof can lead you down an educational historical sleuthing adventure. I hope you enjoyed it.
Abba-Dad at 10:20 PM
Share